Svarta Sanningar (Black Truths) is a Swedish occult post-rock and gothic metal band. Their music has also been described as a heavier and darker version of Depeche Mode, with connections to the bands Ghost and Opeth.

The band’s journey began in 2017 with two old friends, lukewarm beer and a dinner at a Chinese joint in Gothenburg. The founder of the gothic metal band Beseech, Klas Bohlin (vocals) and Jonas Persson (guitar) were talking about music and vinyl records, but were also a bit excited in founding a new band. Svarta Sanningar was formed shortly after in the city of Borås, when Mattias Lejon (bass) and Håkan Carlsson (drums / Beseech), became a part of the dark musical vision.

Svarta Sanningar has built an entire concept around a fictional backstory, which includes an occult order society with the same name as the band. According to rumors, the order was located at the Swedish island Fjärrö during the 70s, but no one seems to know for sure.
» Read the backstory 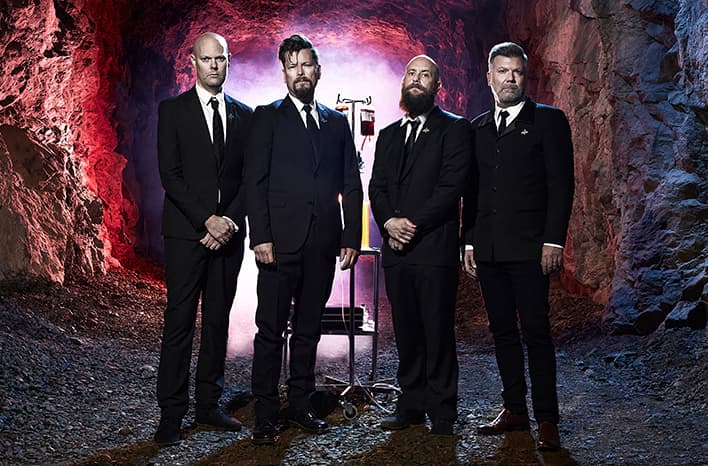 In November 2018, the first EP “Kapitel 1” was released. Despite lyrics in Swedish, Svarta Sanningar caught most attention outside Sweden, but also in highly respected media such as Inferno (Fin), Legacy Mag (Ger), RockHard (Ger), Made in Metal (Esp), Cryptic Rock (Usa) and S.O.S Heavy Metal Radio (Prt) whom also helped out making a digital release party.

The future is anything but bright

Since the band members have years of experience from the music industry, graphic design and album releases (via record labels such as Napalm, Metalblade and Despotz) the band chose to continue on a D.I.Y basis, with a few exceptions. By music lovers – For music lovers! Prior to the release of “Kapitel 2”, important partnerships have been initiated with Grand Sounds PR (Eur) and Republic 66 (Swe). Their task involves a massive promotion campaign, with the aim of creating a great interest in Svarta Sanningar.

• On Friday the 7th of May, the nail biter, single and video for the song “Kemisk Reinkarnation” will be released. The music video was filmed at Borås Stadsteater in a traditional theater environment on a large stage with massive lighting. This laid the foundation for an exciting drama that gave the song an extra dimension, but also a hint of how it might be to watch Svarta Sanningar live.

• On Friday the 21st of May, Svarta Sanningar’s second EP “Kapitel 2” will be released. The overall experience can be summed up as a horror movie on VHS and an H.P Lovecraft drama on steroids. This time, they have taken everything one step further. The songs are extremely well-written and professionally produced. Everything from artwork to their image is now sharpened and honed to perfection.

• 2021 & 2022. For the future, they are looking at the possibilities of playing live, but also to keep the dark force flowing by writing on their next chapter. The portal to the darkness is always open for business, new collaborations or booking live gigs.

E-mail: svartasanningar [at] gmail [dot] com or via Messenger.

Any cookies that may not be particularly necessary for the website to function and is used specifically to collect user personal data via analytics, ads, other embedded contents are termed as non-necessary cookies. It is mandatory to procure user consent prior to running these cookies on your website.