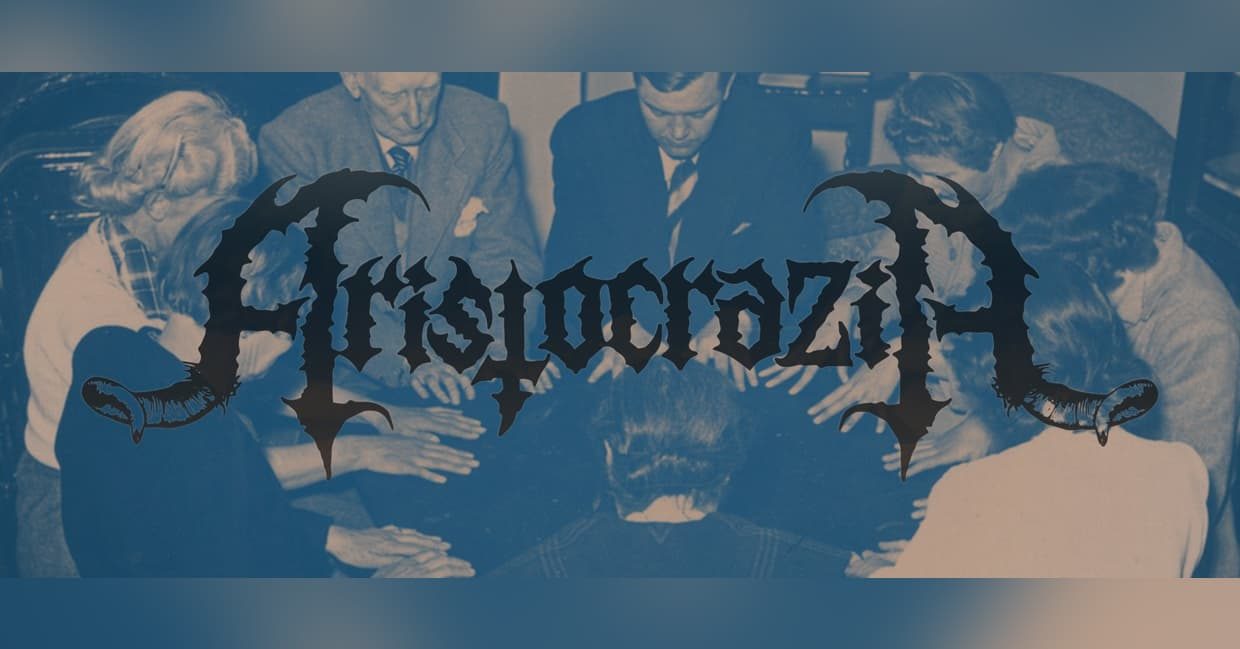 * (google translated from Italian)
It was September 29, 1976 when a landslide of enormous proportions devastated the island of Fjärrö, a few kilometers away from Gothenburg, Sweden. The incident was classified as a natural catastrophe, nothing to worry too much about, although a thorough investigation by the secret services revealed much more mysterious and dangerous backstories, all belonging to an occult secret organization. In addition, this organization was embroiled in shady dealings with a company called PBCL Investments and a private clinic, Fyrens Hospital, owned by Atravs Medical, in which unclear and even less legal experiments were conducted. But there is more: absolutely nothing you have just read has ever happened, otherwise the Svarta Sanningar would certainly not expose themselves so directly.

The Swedish quartet, in fact, did not just play music, on the contrary they decided to go big and invent a story, the one described above, on which to base the concept of their records. The name of the secret occult organization, in fact, is precisely Svarta Sanningar (Black Truths), embodied in real life by Klas, Jonas, Mattias and Håkan, who you see on the cover well dressed and depicted next to what appears to be a corpse . A painstaking and careful writing job, so much so that I had to google more than one name to make sure that there was nothing true in the stories told, and the Intelligence never found me at home after this article.

Conceptually, the first EP of Svarta Sanningar did nothing but scratch the surface of the story, presenting the main characters: the PBCL Investments, a disreputable company that seems to own some plots of land on the island of Fjärrö, coincidentally where the Fyrens stands. Hospital, in which Svarta Sanningar operates human experiments on the edge of the paranormal. In this Kapitel 2 the story continues: the meeting of an exponent of the secret services, Johannes, completely convinced that the landslide was an accident, and Ernst, the pastor of the free church Ljusets Ryttare, who suspects that it is the PBCL Investments that Svarta Sanningar are affiliated with the devil. The two men decide to investigate together and begin to collect evidence relating to human experiments, actual rituals performed with a stone, the dracunite (“Dracunit”), which had the gift of saving terminal patients at the price of inevitably corrupting their souls. . If your curiosity grips you, you will find more details on this Lovecraftian print horror story on the group’s website.

All this translates musically into four rather different songs, from which references to the bands which Svarta Sanningar are most inspired by emerge unequivocally: Ghost (no surprises whatsoever), Kent and Depeche Mode, with a bit of prog à the Opeth that doesn’t hurt. “Kemisk Reinkarnation”, for example, has very strong goth rock overtones reminiscent of the HIM of the good old days, while the synths of “Preparatet” catapult us into decidedly more occult and sinister territories. Klas’s voice is always melodic and clean; the texts, as it is easy to guess, are in Swedish. “Preparatet” talks about the dose of drug to be injected to the patient, or rather unfortunate, so as to make him an astral creature to which Paradise will most likely be barred: it is a black portal that appears in the enigmatic vision described in the following “Ett Ockult Hospital ”, In which elements very close to post-rock peep out. Kapitel 2 ends with a warm-toned ballad that praises the last syringe, the final injection required to become a superior being. What happens next is yet to be discovered, as Johannes and Ernst seem to have some evidence already.

The Svarta Sanningar firmly believe in the project and in the history halfway between occult and sci-fi that they have put together and, it must be said, we believe in it too. The sounds that alternate in Kapitel 2 are varied, now it remains to be seen how the story will evolve and if the sounds of the next works will adapt accordingly, based on the future, potential darkness that may (or not) rise from the bowels of the island of Fjärrö.

Small easter egg: the album is self-produced, since the four members of the band have enough experience in the music field to be able to afford it, yet on Spotify the name Atravs Medical appears in the label section. Is the conspiracy deepening, or maybe not?